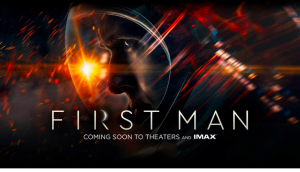 My first impression of FIRST MAN was that it looks great, particularly on an IMAX screen.  The audience feels the  claustrophobia and fragility of the small metal cockpits and cabins that the crews inhabit, so that the physical moments are intense, and worthy of a few sweaty palms.    To fulfil Damien Chazelle’s pursuit of authenticity, and in the manner of Christopher Nolan, no green screen was used, all the effects were created in camera, which is impressive. But this film is not, ostensibly, about the technicalities of the race to the moon, but more about Neil Armstrong the man.  In Ryan Gosling’s Armstrong, we are confronted with a man so contained he can’t cope with his family at all after his daughter, Karen dies.  The moments with her come very early in the film, but the impact plays out throughout the film, particularly as he sets foot on the moon, which is extremely poignant.
The film deals with a lot of loss – the three astronauts who died in a fire, another who died on a failed landing, and obviously, Armstrong’s own daughter. So whilst the film propels you down the route of ‘we went to the moon, but at what cost?’  the message for Neil appears to be that he is  driven beyond reason to prove the mission is possible just to make up to the men who died to help them get there.  But his inability to engage properly with his family makes him come across as a rather cold person – not apparently, how he was in life.  Claire Foy’s excellently portrayed Janet makes him face up to his boys, to tell them to their faces that he might not come back on the night before the epic Apollo mission starts, and this is a task he feels is tougher than going to the moon,  treating it almost as a press conference with himself as  a reluctant participant on the stand.
So the film left me somewhat cold, yet, admiring, and wanting to know more about the reality of that story, and of Neil Armstrong the man.
And to the issue of the flag planting, or rather, the lack of, it is patently clear that the landing on the moon was a more deeply personal moment for him and to detract from the intensity of that moment would be a travesty.  The supreme loneliness of the landscape is so immense and consuming and yet it offers one of the most moving moments of the film.
It’s a 4 hearter!